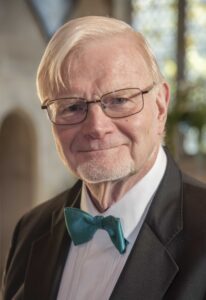 David studied music at Liverpool and Oxford Universities. He specialised first in the early 16th Century keyboard repertoire, and then in the music of the later Middle Ages, working particularly on problems of its interpretation and performance.
As an instrumentalist, David studied the trombone, piano and harpsichord. He appears as an accompanist, and as a continuo player in baroque music. He has also performed widely as a player of several early wind instruments.

In the last few years David has increasingly been invited to work with singers. He has conducted productions of several operas including The Magic Flute, La Bohème, and Handel’s Semele. He has previously directed the Chess Valley Male Voice Choir, the Chiltern Hundreds Bach Choir and the Chorleywood Chamber Orchestra and is presently also Musical Director of the Wycombe Philharmonic Choir & Orchestra.

Whichever group he is working with, David is keen to explore lesser known but good quality music of several periods, as well as the more familiar repertoire.